The research described in this article was supported by Grant Number P50 HD52120 and 1F31HD087054-01 from the National Institute of Child Health and Human Development.

It is common for individuals with dyslexia to be misdiagnosed or even missed entirely.

It is common for individuals with dyslexia to be misdiagnosed or even missed entirely. Why is it difficult to diagnose dyslexia? What can be done to improve diagnosis? Today we understand more about why diagnosis of dyslexia is difficult than we have in the past. This improved understanding points the way toward improved approaches for diagnosing dyslexia that should be available in schools and in clinics within the next few years.

The basic idea is to adapt important models that have become widely used in medicine to the problem of diagnosing dyslexia. For an example of such a model, consider the ASCVD calculator. If you are between the ages of 40 and 75, your next health checkup may provide 10-year and lifetime risk estimates for developing atherosclerotic cardiovascular disease (ASCVD)—likely to result in either death due to coronary heart disease, a nonfatal heart attack, or a stroke. The risk prediction will be made using a risk calculator (available online as http://tools.acc.org/ASCVD-Risk-Estimator/) that determines your risk based on your gender, age, race, HDL cholesterol, total cholesterol, systolic blood pressure, and whether you have a history of diabetes, smoking, or have been treated for hypertension. The ASCVD calculator is also designed to be used for estimating potential benefits from statin therapy by including it as a dependent variable in future statin therapy trials. An important and achievable goal is to build an analogous calculator that estimates risk of having dyslexia. In addition, the calculator could estimate probabilities relevant to functional outcomes, such as the probability that an individual would benefit from use of assistive technology (Wood, Moxley, Tighe, & Wagner, 2018) or the probability of responding to a particular intervention.

Why Is Diagnosis of Dyslexia Difficult? 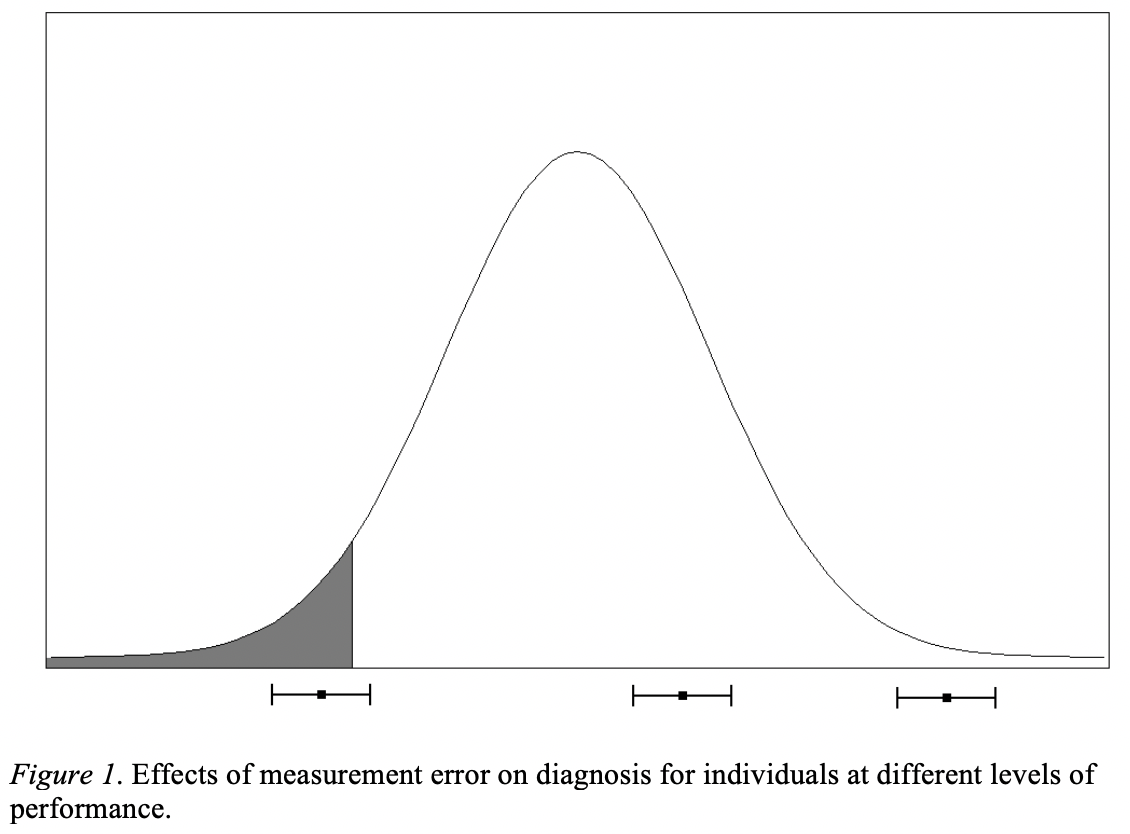 It should be mentioned that diagnosis tends to be difficult regardless of the context. If you or someone you know has experienced a medical disease or a psychological or psychiatric disorder, more often than not, multiple diagnoses were made before arriving at a single correct one—if a correct diagnosis was ever achieved. Turning to dyslexia in particular, reading ability and disability represent ends of a continuous and likely normally distributed distribution. Figure 1 portrays this distribution with a gray shaded area representing the category of having dyslexia. The results of testing three individuals are displayed by lines with a small circle in the middle and bars at each end. The circle represents an individual’s true score or actual point on the continuum, and the line and bars represent the fact that measurement error causes an observed score to differ from a true score. This means that assessment results do not come out the same every time but vary randomly around an individual’s true score. For the individual on the left who is closest to the gray area, measurement error can cause the outcome of a diagnosis of dyslexia on one evaluation but not on another. This is less likely for individuals who are farther away from the cut-off.

A promising solution to this problem is the use of hybrid models that combine multiple indicators or criteria, thereby reducing the effects of measurement error (Wagner et al., 2011). A second promising solution is to avoid use of a cut-off score to decide whether dyslexia is present or absent—and, instead, to recognize the continuous nature of the criterion variable (i.e., different degrees of dyslexia ranging from none to mild to moderate to severe). Turning to potential correlates, ADHD co-occurs with reading disability from 30% to 50% of the time (Willcutt et al., 2003). The incidence of severe reading disability also is greater for males than females, with the ratio of males to females increasing with the severity of the reading problem. Quinn and Wagner (2015) reported the results of a large-scale study of reading impairment that analyzed data related to 491,103 beginning second graders—without any possible referral or ascertainment bias. Four operational definitions of reading disability were examined: poor absolute decoding, discrepant poor decoding, poor oral reading fluency, and discrepant poor reading fluency. Sex differences increased with greater severity of the reading impairment, peaking at a ratio of 2:4 to 1 for a broader measure of fluency and at a ratio of 1:6 to 1 for a narrower measure of decoding, with an average of 2 to 1. Results from three additional tests supported the fact that the sex differences were attributable to male vulnerability rather than ascertainment bias. Finally, a troubling result was that correspondence between identification as having a reading impairment by our study criteria and school identification as learning disabled was poor overall and worse for girls than for boys. Only 1 out of 4 boys and 1 out of 7 girls identified as reading impaired in our study were also identified by their schools as learning disabled—even after we matched the percentage of students identified by both methods so that poor correspondence was not the result of differences in numbers of students identified.

Turning to consequences, which also serve as indicators of the latent construct of reading disability in our model, four proximal consequences are included:

In a large-scale study (N = 31,339) of students who were followed longitudinally from 1st to 2nd grade, Spencer et al. (2014) implemented two versions of a model of reading disability based on the four consequences listed above. The first version, which was dimensional, modeled reading disability as a latent variable with the four consequences as observed indicators. Confirmatory factor analysis yielded an excellent model fit ([χ2(2) = 263.4; Comparative Fit Index = .99; Tucker Lewis Index = .97; Root Mean Square Error of Approximation = .065 with a 95% confidence interval between .058 and .071; note that the large chi-square is expected because of the sample size). The one-year stability of this dimensional version of the model was substantial with a standardized structure coefficient of 0.88. This means that over 75% of the variance in the latent variable representation of reading disability in 2nd grade was accounted for by 1st grade performance. In order to better compare it to existing alternative categorical models, the second model was categorical rather than dimensional. The implementation was based on the number of indicators that were present instead of their continuous levels as in the first version of the model. The one-year stability of various versions of this model exceeded that of traditional, single-indicator models, with the best performing versions of the model approaching twice the stability of single-indicator traditional models.

Referring back to the ASCVD risk calculator, the underlying model used to estimate risk is based on a Bayesian regression model that used biographical information (e.g., gender, age, and race), historical information (e.g., history of diabetes, smoking, and treatment for hypertension), and recently collected data (HDL cholesterol, total cholesterol, systolic blood pressure) to predict heart attack and stroke. Bayesian models are flexible models that can incorporate multiple kinds of information. They are particularly useful when informative priors are available. In the present context, informative priors are baseline probabilities that represent the prevalence of something in the population in general. This population prevalence or prior probability is then updated based on information for particular individuals.

Bayesian models are commonly used in medical diagnosis and policy (Spiegelhalter, Abrams, & Myles, 2004). For example, it has been recommended that women in their 40s do not get routine mammograms unless they have a family history of breast cancer or other known risk factors. The reason is that breast cancer is rare for women in their 40s, which translates into a low prior probability. Mammography is not completely accurate; following up a positive mammogram when breast cancer is not present carries a risk of complications. A woman in her 40s with no known risk factors who gets a positive mammogram still has only around a 10% chance of actually having breast cancer. The probabilities just presented came from applying Bayes theorem sequentially to data from a large-scale database used by Spencer et al. (2014). It makes the simplifying assumption that the predictors are independent. In new work, we have begun implementing a more sophisticated model that relaxes the independence assumption. We are using model-based meta-analysis to generate the data about relationships among predictors and the criterion of having dyslexia. We model dyslexia both as a continuously distributed outcome and a categorical outcome. We then apply Bayesian logistic or Bayesian multiple regression to the data to obtain probabilities that do not assume independent predictors. We believe this approach will generate the most accurate estimates of the probability of having dyslexia.

In summary, existing definitions of dyslexia do not result in reliable diagnosis because they rely primarily on a single indicator. Expanding definitions to include multiple indicators improves the reliability of diagnosis. Moving to Bayesian models with informative priors should result in additional improvement in diagnosis.

Richard K. Wagner, PhD, Robert O. Lawton Distinguished Research Professor of Psychology and the W. Russell and Eugenia Morcom Chair at Florida State University, has focused his research on dyslexia and the normal acquisition of reading. He helped to coin the term phonological processing with his paper “The Nature of Phonological Processing and Its Causal Relations with Reading” to describe related work on phonological awareness, phonological memory, and rapid naming that had previously been viewed as three separate domains of research. Most notably, dismayed by the lack of knowledge and tools available to school psychologists and professionals to help with evaluation of children with dyslexia and other learning differences, Dr. Wagner worked to develop the Comprehensive Test of Phonological Processing (CTOPP-2), the Test of Word Reading Efficiency (TOWRE-2), and the Test of Preschool Early Literacy (TOPEL).

We encourage sharing of Examiner articles. If portions are cited, please make appropriate reference. Articles may not be reprinted for the purpose of resale. Permission to republish this article is available from info@dyslexia.org.