I have been involved in developing and promoting a universally accepted definition of dyslexia for more than twenty-five years. We now know that dyslexia is real; we know what it is and what to do about it. Is there a new mission for the definition or is it time for it to simply fade away?

Is there a new mission for the definition or is it time for it to simply fade away?

After three years of correspondence with dozens of respected researchers and practitioners,[i] we held a meeting in New York City in April 1994 that included Reid Lyon, Jack Fletcher, Sally and Bennett Shaywitz, Bill Ellis, Byron Rourke, Louisa Moats, Bruce Pennington, Gordon Sherman, Marcia Henry, and me. The definition crafted at that time was approved by the Research Committee of IDA and adopted for use in research by the National Institute of Child Health and Human Development of the National Institutes of Health (NICHD).

This definition (represented in the graphic below) was simple and easy to explain. Insufficient phonological processing resulted in difficulty with single-word decoding that, in turn, caused difficulties in reading, writing, and spelling.

After eight years of consistent, replicable, and breakthrough research, IDA organized a second meeting in August 2002 to review the continued relevance of the definition in light of this research. This meeting was held in Washington, DC, with input from Reid Lyon, Jack Fletcher, Sally and Bennett Shaywitz, Susan Brady, Hugh Catts, Guinevere Eden, Jeff Gilger, Harley Tomey, and me. The 1994 definition was revised as follows:

Dyslexia is a specific learning disability that is neurobiological in origin. It is characterized by difficulties with accurate and/or fluent word recognition and by poor spelling and decoding abilities. These difficulties typically result from a deficit in the phonological component of language that is often unexpected in relation to other cognitive abilities and the provision of effective classroom instruction. Secondary consequences may include problems in reading comprehension and reduced reading experience that can impede growth of vocabulary and background knowledge.

This definition was more nuanced. A deficit in processing the phonological component of language resulted directly in difficulty with decoding, spelling, accuracy, and fluency that, in turn, impacted comprehension and reading experience. Impoverished reading experience further impacted the development of vocabulary and background knowledge, which also had a negative influence on comprehension. 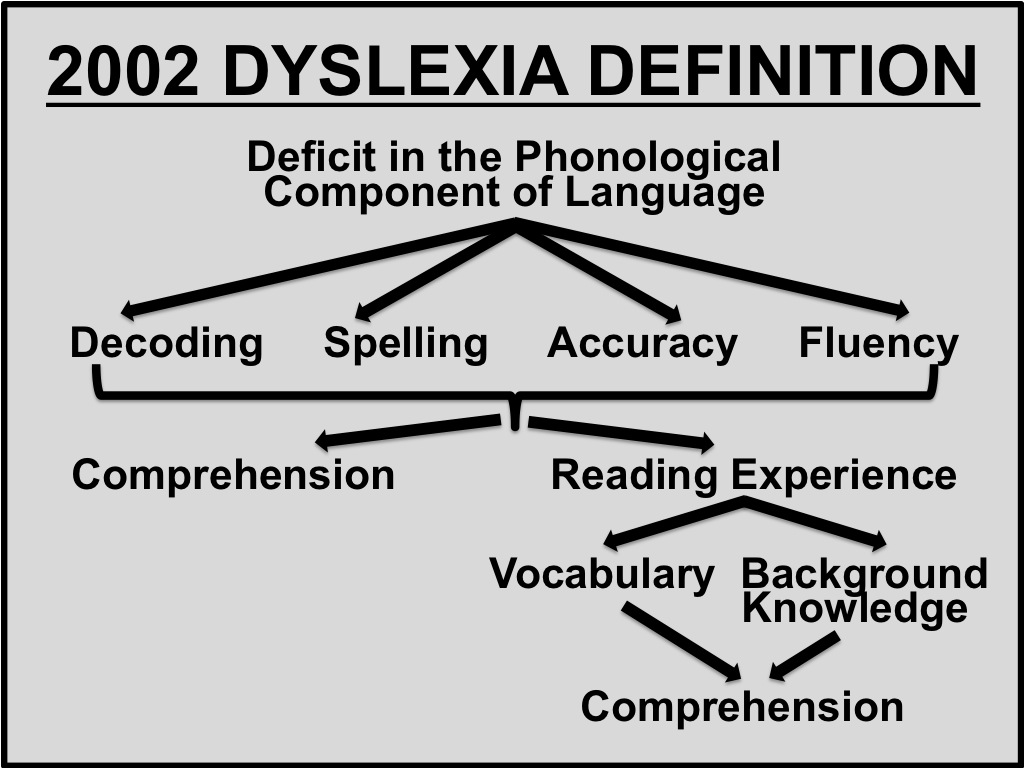 Is the Definition Still Valid?

At the IDA conference in November 2016, I was asked to seek consensus among the scientific community as to whether it was time to revisit the definition once again.

At the IDA conference in November 2016, I was asked to seek consensus among the scientific community as to whether it was time to revisit the definition once again.

Thirty well-known researchers and practitioners took part in the discussion. After several months, Dr. Jack Fletcher summed up the opinion of the group as follows:

There appears “no compelling reason to change the definition of dyslexia. The definition remains meaningful for research and for practice. It includes inclusionary criteria, which is critical. It does not specify operational criteria, which is impossible (i.e., thresholds for severity or eligibility). There should be no equating of dyslexia as a diagnosis and eligibility for special education because there must be a demonstration of educational need.”

Is the Definition Less Important Now?

Consensus has helped to guide research for more than twenty years. At this point, thanks to the focus and dedication of Dr. Reid Lyon, neuroscientist and chief of the Child Development and Behavior Branch, NICHD from 1998 to 2005, research has determined how children learn to read, why some children have difficulty, and what to do about it. Therefore, the usefulness of the definition for the purpose of research and practice has diminished; those battles have been won

A definition, such as the definition of dyslexia, has a life cycle. First, it informs research that requires common cohorts to promote replicability. Then, it promotes practice to identify effective principles of instruction, and, finally, it creates policy to identify the demographic entitled to such research-based practice.

This definition has left its mark on research and practice and is currently contributing to policy to ensure that all children in need have access to research-based practice. Figuratively speaking, the research in reading has resulted in a vaccine that, given wide use, should ameliorate most difficulty in learning how to read.

The term dyslexia might fade into obsolescence like smallpox, polio, and pertussis. However, if someone didn’t identify what polio was, create a cure, and get that cure to the masses, we would still be hearing the term and reading about it every day. If some day, we stopped using the term dyslexia altogether, that might be a good thing! Right now, however, we are at a critical stage of getting the vaccine to the masses.

The dangers are that an overreliance on using the term in legislation may deny services to those with a remediable difficulty developing literacy skills if they do not receive a diagnosis of dyslexia. Diagnosis alone was never intended to be sufficient to determine eligibility for services. Neither was diagnosis intended to be a prerequisite to being found eligible for services.

There are various reasons why individuals struggle with developing literacy skills; dyslexia is but one of those reasons. Some suggest that the term dyslexia be discarded and that the term reading disability be used in its stead. If it is redefined as such, and the terms are synonymous—I agree.

However, if dyslexia is intended only to refer to that phenomenon that, per Diane Sawyer and others in 2008, is responsible for “the largest amount of variance” (i.e., phonological deficits), it has the advantage of providing some taxonomic structure to the study of reading difficulties (e.g., dyslexia is a subtype of unexpected difficulty learning how to read, an unexpected difficulty learning how to read is a subtype of a learning disability, and so on).

The term dyslexia means many things to many people. It is used by some as an excuse to explain perceived failure and by others as a characteristic to support superiority. A meaningful definition allows those who are interested in understanding each other to efficiently and effectively communicate.

The IDA definitions are the foundation upon which reading research has been based for twenty-three years. The need for universal consensus with regard to a definition of dyslexia persists even though the mission has changed. Emerson Dickman is an attorney and has been an advocate for individuals with disabilities and their families for more than forty years. Among the cases he has handled are leading precedents (New Jersey Supreme Court) protecting the due process rights of pupils in special education (Lascari) and the constitutional rights of adults with developmental disabilities (J.E.).

Emerson is a past president of the International Dyslexia Association and a former IDA representative to the National Joint Committee on Learning Disabilities.  He is currently a member of the Professional Advisory Boards of the Center for Development and Learning and The Children’s Dyslexia Centers. In the past, he has served as secretary of the Arc of New Jersey, a member of the Professional Advisory Board for the National Center for Learning Disabilities (six years), a member of the Learning Disabilities Roundtable sponsored by the Division of Research to Practice of the U.S. Department of Education, chairman of the Protection and Advocacy Agency for the State of New Jersey (five years), and a founding board member and secretary of the Alliance for Accreditation and Certification (for Structured Language Education). Emerson has received numerous honors including the 2012 Margaret Byrd Rawson Lifetime Achievement Award from the International Dyslexia Association.

Copyright © 2017 International Dyslexia Association (IDA). We encourage sharing of Examiner articles. If portions are cited, please make appropriate reference. Articles may not be reprinted for the purpose of resale. Permission to republish this article is available from info@dyslexiaida.org.